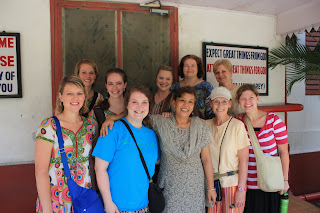 Today was such a good day. We felt like we were really on a mission trip today. After working at the Mother Teresa Center for Death and Dying, we went back to Freeset. But, today, we actually worked there. Yesterday was just meeting and touring. Today, we sat down and worked just like the women who work there do every day. I sat in the middle of about four women who found me the funniest thing they had ever seen. I was such an oddity. They could speak a little English since the people who founded and run Freeset are from New Zealand, an English speaking country. So, we could communicate surprisingly well. We were measuring and cutting strips of old saris to be sewn onto the bags they make there, just one step in the process.

They taught me a little Bengali. I can count to ten in Bengali, sort of. But, the best thing I learned was that the way they nod their heads for “yes” and “no” is different from our way of doing it. For “yes” it’s a slight tilt of the head to the right; for “no,” it’s right then left, not back and forth like we do it. It kind of looks like a bobble head toy. I’m learning that Indians really have a sense of humor, and they are very affectionate. They are very touchy-feely. They really are sweet once you get to know them. My first impression of India was horrific poverty and overwhelming needs. I still feel that way, but I’m seeing that there is much more to it than that.

The women I was sitting with, Annapuna (I know that’s spelled right, because she wrote it for me), Josna, Rina, and Anjolie (or at least that’s what it sounded like) were fascinated by my wedding band and my cross necklace. They had never seen diamonds before. Annapuna said she wants a diamond. They giggled about that. I told her that men in America give their wives diamonds to show love. She took her nose ring out and said her husband gave it to her as a wedding gift. They were singing, so I said, “I sing for you.” I sang “You are My Sunshine,” and they thought that was too short. So, I sang all four stanza’s of Amazing Grace, not the Chris Thomlin version, but the one I learned growing up, and that just caused a huge commotion. Everyone on that floor wanted to hear. They sing there in the mornings, but they sing in Bengali. So, I’m not sure how much singing they’ve heard in English.

They wanted to know all about me, my kids, my husband. They knew what radio was, so they were very, very impressed that my husband is on the radio. They were really so much fun to be around. I loved being with them. I tried to keep it light tonight (we worked to 7:00), so they could just get to know me. I am hoping I’ll get to lead their morning devotion one of these mornings. That was kind of the plan before we left, but we have had to be very flexible since none of us have ever been here and because the culture is so different from ours.

Annie, the owner’s wife, took us around Sonogocci, their community which is India’s largest redlight district. We saw women sitting outside their doors waiting on customers, but my group didn’t get to go down the main street where I’m told they stand shoulder to shoulder. Some others in our group did, but Annie didn’t want to take us all to the same place. She took Ashley and me basically around the block and through some extremely narrow and very dirty alleyways over to a friend’s house. Annie has been living in Sonogocchi for a long time now. I know they’ve lived in India for 13 years, and I think Freeset is two years old. Kerry and Annie live at Freeset in a very small but hospitable apartment. We ate there tonight in fact. This “friend” is, of course, a former prostitute. She lives in Sonogocchi, right? She is 25 years old and has a daughter who is 12. You can do the math. But, she was beautiful, both of them actually. We walked into her home which was only one room, but there was a large bed in it, very tall, that she motioned for Ashley and me to sit on. I was a little hesitant to say the least. Then, she offered us tea, which we were also a little hesitant about. “Westerners,” as we are called here, can’t drink India’s water, only bottled water. We even brush our teeth with it. We have been told very sternly that we should not even get the tap water in our mouths at all. I have been very careful even in the shower to make sure my mouth is shut tight at all times, and here I was being offered tea in the very worst part of Kolkata. Annie told us that since it was hot tea and had been boiled we should be fine. So, we drank it. Tomorrow we’ll know if we have parasites or not. I’m kidding. I really think we’ll be fine.

But, this woman was so sweet and kind. We learned that she worked at another “business” like Freeset that hires these women to do something to make them proud of themselves. In her factory, they make blankets made from old saris. If I haven’t said before, a sari is the brightly colored traditional clothing of Indian women, so the designs are very lovely. She showed us some of the things they had been working on. I told her I would love to have one. Maybe I’ll be able to before the week is up. Her daughter showed us her school uniform. A New Zealand family sponsors her to go to school. In that little one room home, there was so much hope. She had a picture of Jesus hanging up, and we prayed together, four women and one little girl, all of us so very thankful that Jesus had pulled their family up out of the pit of sin and despair into the light and is giving them hope. This young mother’s face shone with the light of Jesus. You could see it. She couldn’t understand a word I said when I prayed, but there were tears in her eyes when I finished. Annie said they are moving to a little nicer place soon. They seemed so glad to be getting out.

My heart felt so glad to know that in this city with so much poverty and so much despair, the light of Jesus is shining. I saw hope and love and joy today. What a blessing to be a very small part of the good that has been done in Kolkata, at least for today.

Posted by Sherri Burgess at 1:49 AM